The permanent exhibition of the Holocaust Memorial Center, “From Deprivation of Rights to Genocide” is displayed on some 1500 sq. meters in the exhibition halls situated in the basement of the building.

For the periodic exhibitions the space of the refurbished synagogue, particularly its gallery is used.

Architect István Mányi placed the exhibition on the Holocaust Hungary in underground rooms, signaling that the displayed history represent a dark chapter of the human morality and ethics. The interior architectural elements (the sloped floor, division of space by columns) reemphasize this message, guiding the visitor into the developments, hinting that the events, once put on a historical slope led to the nadir, the genocide. 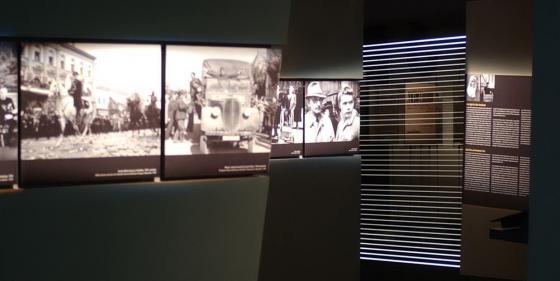 “The design of the permanent exhibition was not our task, but we have created its mental and physical frame, because without it, the whole building can’t be interpreted.

We have imagined the topic, where in a space defined by slopes, tilted columns and twisted ceilings, the story starts from the first Jewish Act, the numerous clauses , and through concentrations and deportations, it narrows to the Holocaust itself.