GHETTOS BEYOND BUDAPEST
„… none of them will be spared here.”

On March 19, 1944, German troops occupied Hungary. The Sztójay government, appointed by Governor Miklós Horthy, took office on March 23. The period of disaster began for Hungarian Jews who were deprived of their rights, excluded from society, and plagued by a plethora of Jewish laws and regulations. It was the beginning of their physical destruction. By July 9, 1944, virtually all rural Jewry had been deported.

From April 5, 1944, a decree required all Hungarian citizens (Christians included) who were classified as racially Jewish to wear the distinctive sign, the yellow star. Later, this decree became the basis for coercing them into ghettos.

The Hungarian administration organized the rural ghettos: they designated their location, defined the tasks of the Jewish Council, provided an inventory of Jewish property, provided services, and provided for penalties for concealing or hiding Jewish property. 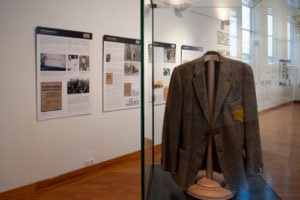 The organization of life in the ghetto suggests that the Hungarian authorities considered them as temporary collection centers. Their primary goal was to concentrate the Jews before they were deported. Because of this, terrible conditions prevailed in the ghettos: congestion, deprivation, famine, complete lack of hygiene, and the spread of disease made the weeks spent there even more excruciating for its inhabitants. The majority of the rural Hungarian population withdrew passively and was only an observer of the atrocities of the Second World War. Compassion and helpfulness were manifested only on the part of individuals or smaller communities.

And what did the local non-Jewish population know about all this? Essentially everything… It was enough to read articles in the national and local press or study street posters and wall stickers. Based on their daily experience — knowing the fate of their neighbors and colleagues — they could see that they had taken away almost all of their belongings from the Jews, and soon after, their real estate, shops, and workshops outside the designated ghetto. The Hungarian population was aware that „… none of them will be spared here.”