The Moscow Conference on Countering Xenophobia, Antisemitism and Racism 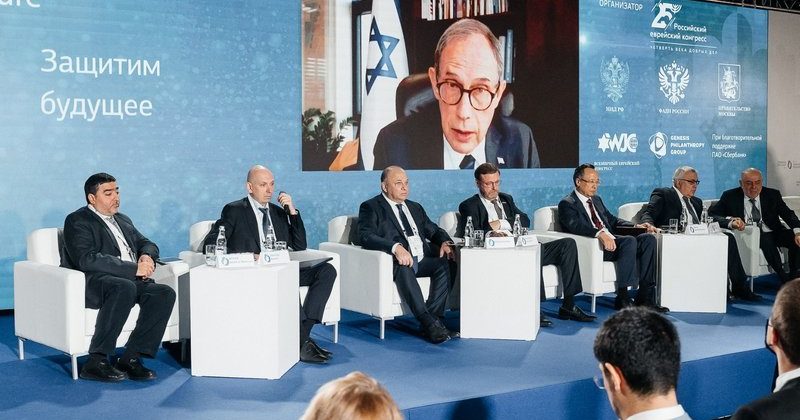 The Third Moscow International Conference on Countering Xenophobia, Antisemitism and Racism “Protecting the Future” was held on November 22-23. It was organized by the Russian Jewish Congress (RJC) with the support of the Ministry of Foreign Affairs of the Russian Federation, the Federal Agency for Nationality Affairs of the Russian Federation, the Government of Moscow, and Sberbank. The partners are the World Jewish Congress, the Genesis Foundation, the International Center of Holocaust and Genocide History of RSUH.

The two-day forum brought together hundreds of experts, scientists, activists and statesmen from 41 countries (35 countries were represented in 2018). The participation of chief executives of international organizations (including the OSCE, UNESCO, the UN, the European Parliament and others), as well as world-class experts in countering xenophobia, antisemitism and racism, was certainly a solid achievement and made the Moscow Conference a great public event recognized by the world expert community. The Holocaust Memorial Center in Budapest was represented by director Dr. Tamás Kovács at the conference.

“We, Jews, have perhaps the most extensive and tragic experience of encountering the consequences of xenophobia. Unfortunately, we have something to share. Russia today has one of the lowest levels of anti-Semitism in its entire history, at the same time, xenophobia in any of its manifestations is a threat to future peace and well-being,” — Yuri Kanner said.

The conference program was also significantly expanded. A round table on discrimination against Muslims (with the participation of Deputy Head of the Spiritual Assembly of Muslims of Russia and Head of the Administrative Department of the Spiritual Administration of Muslims of Moscow and the Central Region Denis Hazrat Mustafin; Head of the Group for Migration and Ethnicity Research, senior researcher at RANEPA Evgeni Varshaver; Gayat Akhmateshin from the international department of the Muftiat of Tatarstan and other experts), a round table of patrons and philanthropists financing projects to counter xenophobia (moderator — member of the RJC Presidium Office and the RJC Consul of combating antisemitism Viktor Vekselberg; among the participants: members of the RJC Presidium Office Mikhail Fridman and David Yakobashvili, President of the RJC Yuri Kanner, philanthropist Ruben Vardanyan and Ahmed Obeid Al Mansoori from the UAE), a section dedicated to online multiplayer online games, as well as the First International Forum “Museum as a modern tool to counter xenophobia” organized jointly with the Jewish Museum (which was attended by representatives of 16 museums from 12 countries), were held for the first time.

On the first day of the conference, plenary meetings “Countering xenophobia, antisemitism and racism: global challenges and new trends”, “Religious leaders and their influence on interethnic and interfaith tensions” and sections “Sport is a trigger for exacerbating xenophobic sentiment and a tool to counteract them”, “Cultural projects as an instrument of intercultural understanding and tolerance”, “Xenophobia, antisemitism and racism in the media: successes and failures of counteraction”, “Research of xenophobia and antisemitism: methods, forms, problems”, “New educational trends aimed at preventing xenophobia”, “Fighting together: the role of Israel in the fight against antisemitism in the Diaspora countries”, as well as sessions of the youth panel “Social networks: Creating effective content and countering content that spreads hate speech. What can we do?” and “How to attract and empower future leaders of Jewish communities” were held.

The program of the second day included a special round table “Education of humanism and empathy in children”, organized by the Women’s League of the RJC; sections “Islamophobia: challenges and threats”, “Interaction of the state and civil society in the fight against xenophobia, antisemitism and racism”, “Online hate speech — a new battlefield: players, positions, rules”, “Denial and downplaying of the Holocaust and genocides: forms of counteraction, problems of legislation”, “Network and multiplayer computer games — an uncontrolled platform of xenophobic sentiments among young people?” and “The international scientific community and countering racism and incitement to hatred”; meetings of the First International Forum of Museums on the topics “Best practices of museums on the prevention of xenophobia and combating it” and “The Museum as a modern tool for countering xenophobia”; a round table on financing projects against xenophobia and antisemitism in Russia, as well as sessions of the youth panel “The Power of identity for Jewish unity” and “Togliatti story of X”.

For the whole article see the Facebook page of the Conference.