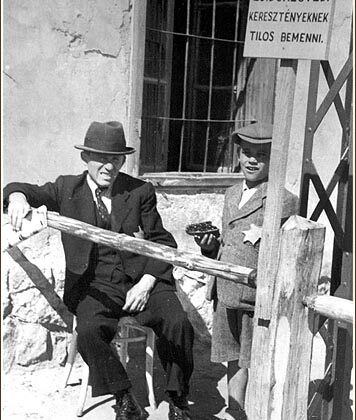 By creating the exhibition “Walls, Marks, Destinies – Deportation of Hungarian Jews to Auschwitz”, the authors aimed at meeting the interest of teachers and students for one of the most tragic sequence of events in the Hungarian history, the extermination of the Jewish communities outside the capital in spring and summer of 1944.

The mass deportation of Jews from Hungary started on 14 May 1944. During the following 56 days, 437 thousand people were dragged away from home and crammed into boxcars. With few exceptions, they were transported to Auschwitz-Birkenau, an extermination camps situated in occupied Poland, where the majority was murdered in gas chambers within couple of hours. The previously unknown Polish town, Auschwitz has become the largest Hungarian cemetery and the symbol of genocide. More than 300 thousands of our compatriots have been murdered there, most of them women, children and elderly.

The aim of the exhibition

The main objective of the exhibition is to provide a concise introduction to teachers, students and other interested visitors of one of the most tragic sequences of events in the Hungarian history, the destruction of Jewish communities outside the Hungarian capital. It is important that students understand the historical significance of Hungarian Holocaust, the active role played by the Hungarian authorities, the organization and intensity of logistics and the shocking reality of destruction of entire communities.

The exhibition was co-financed by the European Union, European Social Fund.