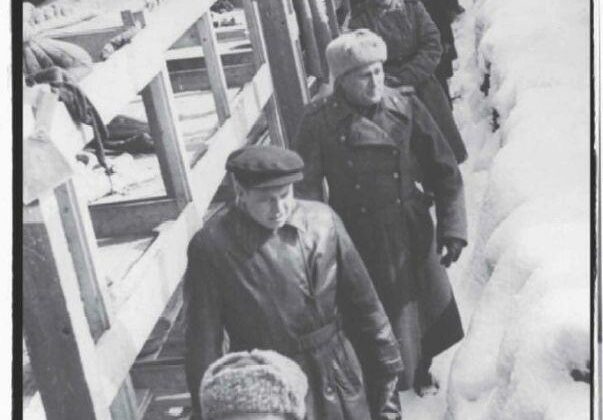 In 2020, the 75th anniversary of the liberation of Auschwitz, the emblematic extermination camp of the Nazi Germany, a unique symbol of cruelty and inhumanity is observed.

At this occasion, the Holocaust Memorial Center in Budapest stages a chamber exhibition jointly with the Russian Holocaust Research and Education Center and the Russian Jewish Congress. The core of the exhibit had been prepared by the Russian partner, displaying the persecution of the Soviet Jews on the occupied territories and those efforts that eventually led to the liberation of the few survivors. The central theme of the exhibition is the liberation of Auschwitz, presenting not just the story of the military operation, but also the efforts of the Red Army Medical Corps in saving the lives of the some 7,000 extremely exhausted and weak survivors. In this undertaking, the experiences gained during the previous military operations and in particular the lessons learned at the long-lasting siege of Leningrad were of crucial importance. This core part of the exhibition has already been presented to the public of several European countries, from the United Kingdom through Belgium to Germany.

The Holocaust Memorial Center in Budapest has complemented the exhibition with panels presenting part of the history of the Holocaust in Hungary, culminating in deportation of some 430,000 Jewish citizens to Auschwitz, as well as with displaying items and artefacts linked to Auschwitz that are preserved in the collection of the Center.

This website uses cookies to improve your experience while you navigate through the website. Out of these, the cookies that are categorized as necessary are stored on your browser as they are essential for the working of basic functionalities of the website. We also use third-party cookies that help us analyze and understand how you use this website. These cookies will be stored in your browser only with your consent. You also have the option to opt-out of these cookies. But opting out of some of these cookies may affect your browsing experience.
Necessary Always Enabled
Necessary cookies are absolutely essential for the website to function properly. These cookies ensure basic functionalities and security features of the website, anonymously.
Functional
Functional cookies help to perform certain functionalities like sharing the content of the website on social media platforms, collect feedbacks, and other third-party features.
Performance
Performance cookies are used to understand and analyze the key performance indexes of the website which helps in delivering a better user experience for the visitors.
Analytics
Analytical cookies are used to understand how visitors interact with the website. These cookies help provide information on metrics the number of visitors, bounce rate, traffic source, etc.
Advertisement
Advertisement cookies are used to provide visitors with relevant ads and marketing campaigns. These cookies track visitors across websites and collect information to provide customized ads.
Others
Other uncategorized cookies are those that are being analyzed and have not been classified into a category as yet.
SAVE & ACCEPT